View the original article at PasadenaWeekly.com

Brian Berdan grew up surrounded by music, with his father Brooks regarded as one of the Los Angeles area’s top audio experts. In addition to building a career at the 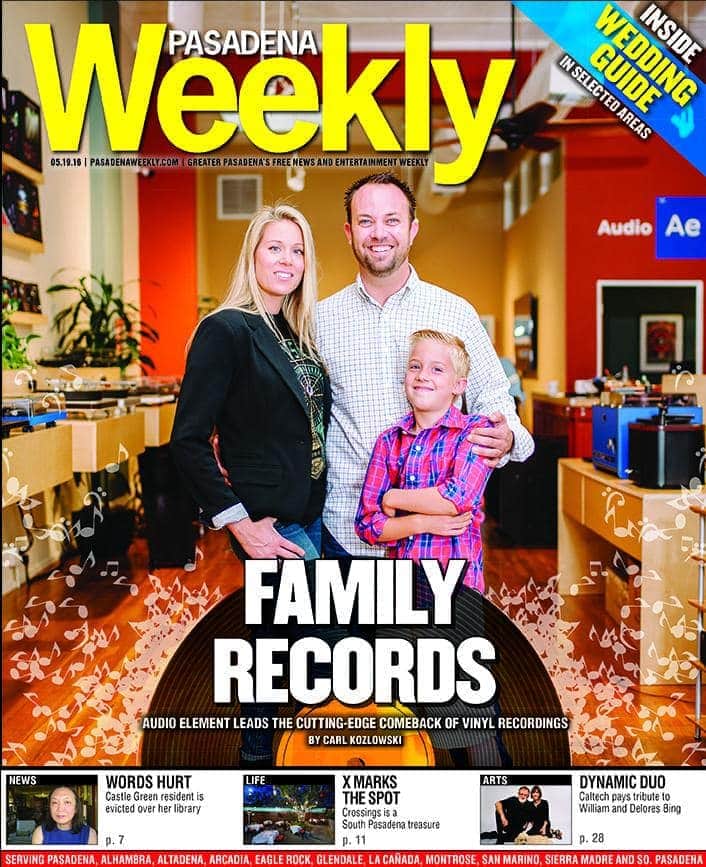 now-defunct GNP Audio Video store on Colorado Boulevard, Brooks opened his own shop — Brooks Berdan Ltd. — in Monrovia, where Brian worked with him for a decade before his father’s death in 2011.

Yet it was the Berdan family home in La Verne — filled with tens of thousands of vinyl record albums as well as numerous turntables and sound systems — that truly reflected their passion. When Brian’s girlfriend and eventual wife Jennifer walked into their house for the first time at age 18, she quickly realized she had fallen in love not only with him but their world of sound.

Together, Brian and Jennifer have been running the audio equipment store Audio Element since 2013. Brian stopped working at his father’s store after his dad died, even though other family members have kept it going, and he and Jennifer chose Old Pasadena as the new home base for their eclectic array of headphones, turntables, speakers and electronics for all budgets.


That decision has paid off well, with the Berdans benefitting from what has been termed the “vinyl revolution,” a moniker reflecting the rapidly growing comeback of vinyl record album sales over the past decade. Yet it also signifies the ever-expanding market of those seeking optimal sound quality in both old-school analog sound like albums, and the most cutting-edge forms of digital technology.

“The reason why vinyl went away in the mainstream is that with [digital file-sharing service] Napster, you get your music so fast and so easy,” says Jennifer Berdan. “With the digital era, it’s all at our fingertips, and we start to take that for granted. In our throwaway society, people want to feel a connection and it’s a different experience when you can hold up a vinyl cover and look through it and put it on the record player, when you cue it up and sit and listen.”

“It’s really about making music as good as possible, and seeing the shock and awe on people’s faces when they hear how amazing a recording can really be,” adds Brian Berdan, who also travels around the world setting up hi-fi rooms at audio conferences. “Go to Best Buy and a sound system doesn’t knock your socks off. It’s listener fatigue and you just want to leave the room. But here you’re mesmerized and you just want to keep listening.” 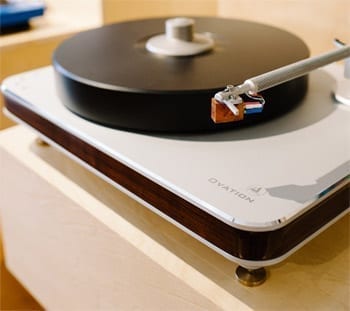 There are a lot of people seeking out stores like theirs these days, as Recording Industry Association of America (RIAA) statistics show, vinyl record sales grew by 30 percent in 2015 alone. The total sales for vinyl records last year were 11.92 million, up from 9.19 million in 2014. And because the niche audience that seeks out vinyl albums wants their needs met by high-level expertise, 45 percent of all vinyl sales come from independent record stores.

That popularity is also rubbing off on Pasadena’s two longest-running record stores: Canterbury Records and Poo-Bah Record Shop. Both stores noted that with most of the new releases on vinyl, customers get the best of both the analog and digital worlds.

“A lot of new artists are enclosing download cards with their vinyl albums, so buyers can have both forms,” says Scarlett Cross, who has worked at Canterbury for the past year. “Vinyl is being mass-produced all over again, and for those ages 15 to 30, they’re very interested and it’s brand-new to their generation.”

“More people are getting rid of their CDs and going to vinyl,” says Gary Nissley, who has worked at Poo-Bah since the early 1980s, “making me the last of the old people here.” “Record companies and corporations drove vinyl out, because it was cheaper to make CDs. But CDs aren’t indestructible, and don’t last anywhere near as long. And don’t forget the impact of deejays and record producers working with turntables and vinyl for samples because it just sounds better than getting them digitally.”

Canterbury and Poo-Bah concentrate on helping record collectors build their music collections, while Audio Element helps music fans find the optimal way to listen to them. While the middle of the store features racks carrying several hundred albums, the focus of the store is on sound systems.

The front of the store features a “turntable bar” with several types of turntables linked together with switching systems that enable visitors to test the sometimes subtle, sometimes vast differences between them. It’s there that the store features the reasonably priced end of the audio craze, with turntables selling for as low as $299 and the most popular model selling for about $450.

Visitors who head towards the back will wind up in a custom-designed room where they’re invited to sit back on a couch and get their senses blown away with albums played on the store’s biggest and best systems. Those who want to hear the best imaginable digital playback can ask to hear the dCS Vivaldi in action — a five-deck stack of components that costs a cool $100,000.

But in demonstrating the sound of the Talking Heads classic  “Burning Down the House” at its maximum potential, Jennifer placed it on an AMG Viella turntable with a Benz LP-S cartridge and let it blast through an array of speakers that appeared to easily be taller than third-grade children.

The effect was a surround-sound extravaganza, with the song’s crashing drumbeats sounding like they could shake the walls while maintaining a crisp clarity that felt like listeners were onstage with the Heads at full throttle. At that point, a listener doesn’t have to know all the ins and outs of technology and terminology to know they’re having a unique experience.

But ultimately, that high-end audio encounter is just a fancier way of immersing a listener in the same kind of magic they can get by placing a vinyl platter on a $400 turntable, closing their eyes and drifting away. And that sense of intimacy is why Brian believes this time, albums are here to stay.

“Vinyl is a process, similar to going out on an evening with your other half,” says Brian. “You prepare, travel to and enjoy. Vinyl can be very much the same thing; a process that has amazing abilities to touch you in your soul. It draws you in, like when you decide ah tonight’s a vinyl evening the TV is off, maybe you light a fire and opened a favorite bottle of wine. It’s something you hold and connect with, and that’s a rare thing in today’s society.”